It provides all the steps required to debug PHP applications using Xdebug and Visual Studio Code or VS Code on Ubuntu.

In this tutorial, we will discuss the terms specific to debugging and the steps required to debug PHP programs using Xdebug 3 and Visual Studio Code or VS Code for PHP applications on Ubuntu 20.04 LTS. It assumes that PHP and Web Server are already installed on the Ubuntu system.

This section explains all the major terms specific to debugging. These are listed below.

Current Instruction Pointer - The instruction pointer pointing to the current statement where the debugger is paused and waiting for the next instructions.

Breakpoint - The program execution pauses at the breakpoint until further instructions are not provided by the debugger. The breakpoints are added intentionally to check the program for possible errors.

Step Over - Execute the current statement without going into the function if it's there. It skips the function and executes it without entering into it.

Pause - Pause the current execution. The instruction pointer will point to the statement where the execution pause.

Stop - Terminate the current execution of the program and clear the variables stack and breakpoints from memory.

In this section, we will test whether Xdebug for PHP is installed and the steps required to install and configure the most recent version of Xdebug for PHP on Ubuntu 20.04 LTS.

Write a simple program to print the output of phpinfo() function as shown below.

We can either run it on Console or access it via browser. It should be similar to Fig 1. 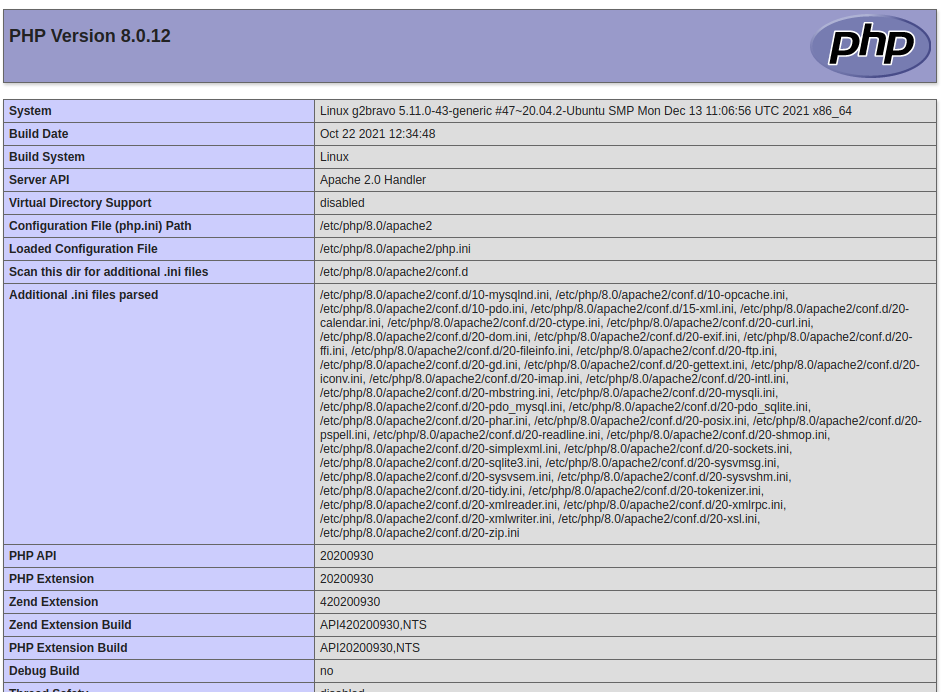 Now, copy the content and paste it within the input box of Xdebug Installation Wizard as shown in Fig 2. 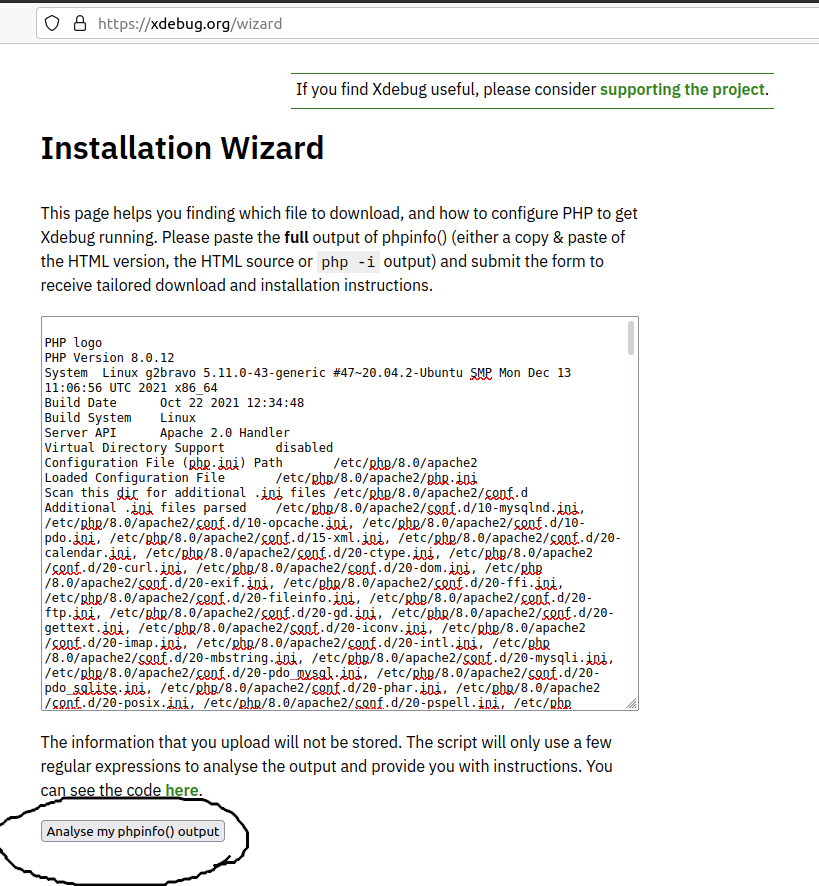 Now click the Analyse my phpinfo() output button to start analyzing it. It will show whether Xdebug is installed as shown in Fig 3 and also shows the steps to install or update the most recent version of Xdebug for PHP as shown in Fig 4. 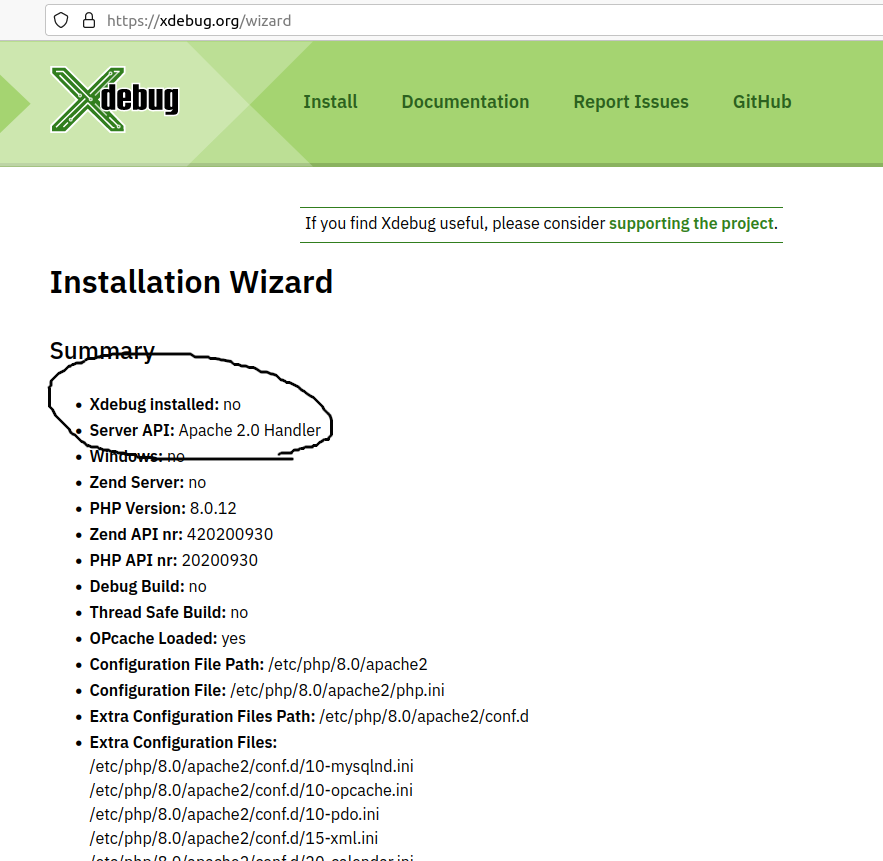 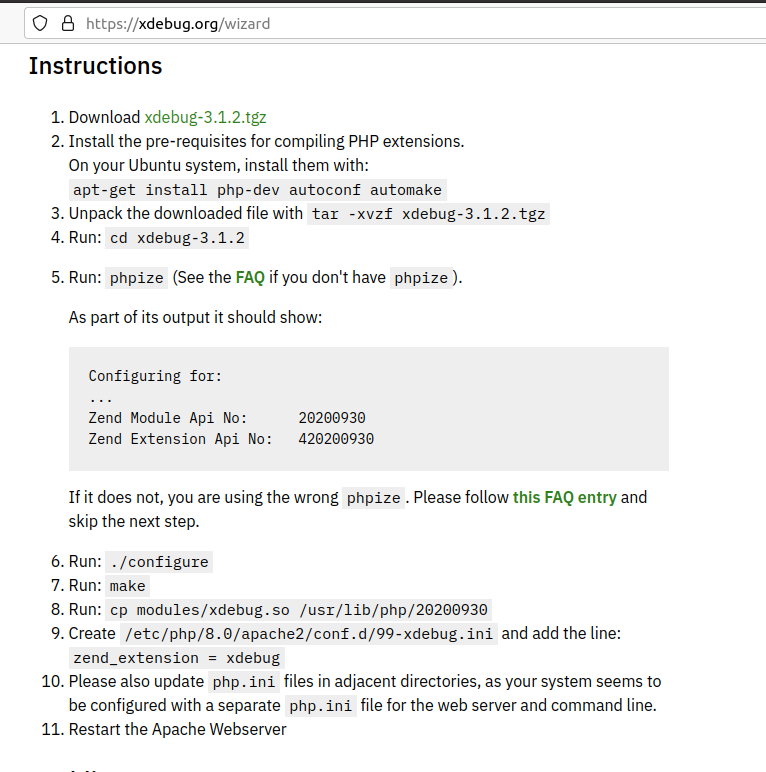 We can follow the steps mentioned by the Xdebug analyzer to install Xdebug for PHP 8 on Ubuntu 20.04 LTS as shown in Fig 4.

Now, verify whether Xdebug is installed by checking the PHP info output as shown in Fig 5. 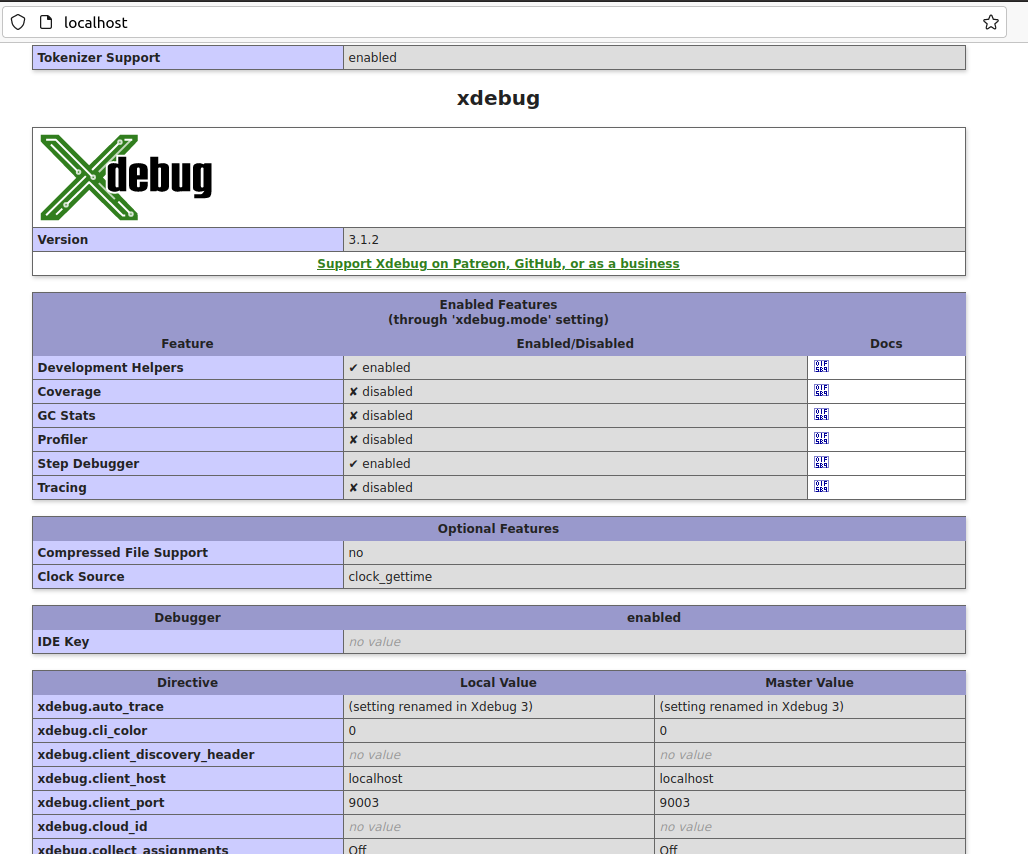 Install Xdebug extension for VS Code

In my case, it shows that the PHP Debug is already installed. You can click the Install Button in case it's not installed yet.

Now, right-click the source folder and click the New File option. Also, enter the file name as debug.php and hit Enter. It should create the file as shown in Fig 8.

Next, add some code for debugging purposes as shown in Fig 9.

Now, add breakpoints on lines 2 and 6 by clicking on the area at the left of the line numbers as shown in Fig 10.

We also need to configure the Visual Studio Code to debug our code. Click the Run Icon on the Activity Bar on the left side to start configuring for xdebug. It should show the options as shown in Fig 11.

Now, click the create a launch.json file to configure the project for debugging. It will create the file as shown in Fig 12. 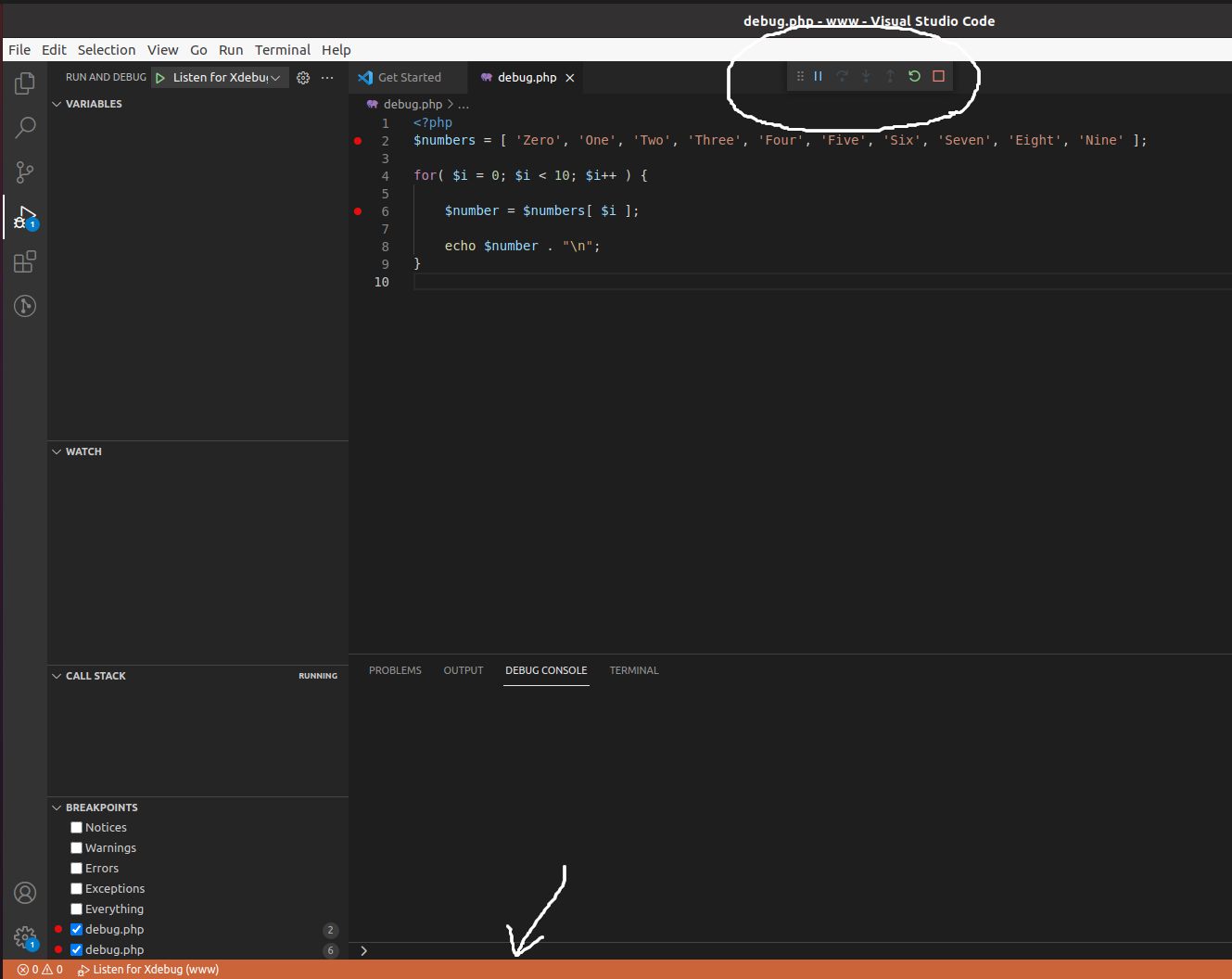 Now try to access the debug.php script from the browser using the URL - http://localhost/debug.php. In the beginning, the debugger will pause at the first breakpoint added by us at line number 2 as shown in Fig 15. Also, Visual Studio Code will maintain the variables and methods call stack as shown in Fig 15. 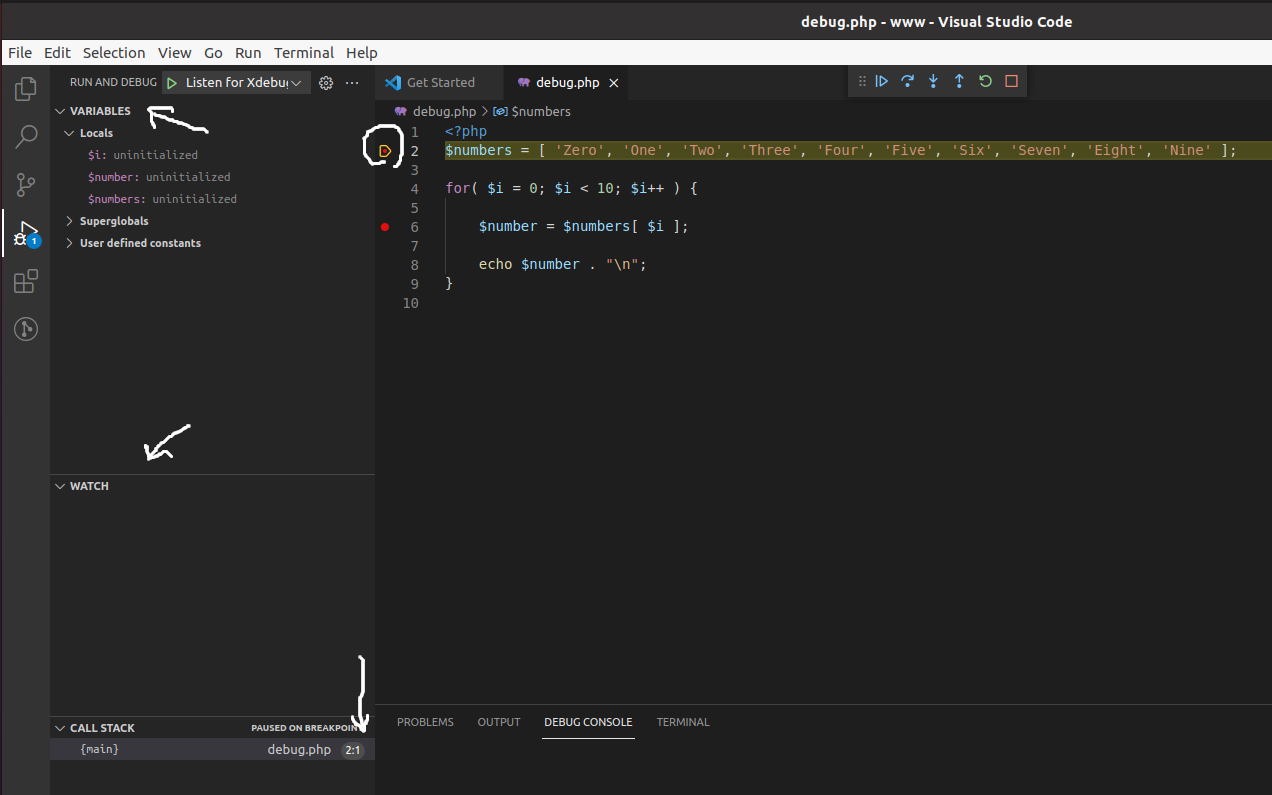 Now, click the Step Over Icon or press F10 to move to the next step. We can also click the Continue Icon to move to the next breakpoint. Also, keep a note of the variables stack after clicking the Step Over Icon. It should initialize the variable $numbers in the example given by me and as highlighted in Fig 16. Also, check the call stack as highlighted in Fig 16. 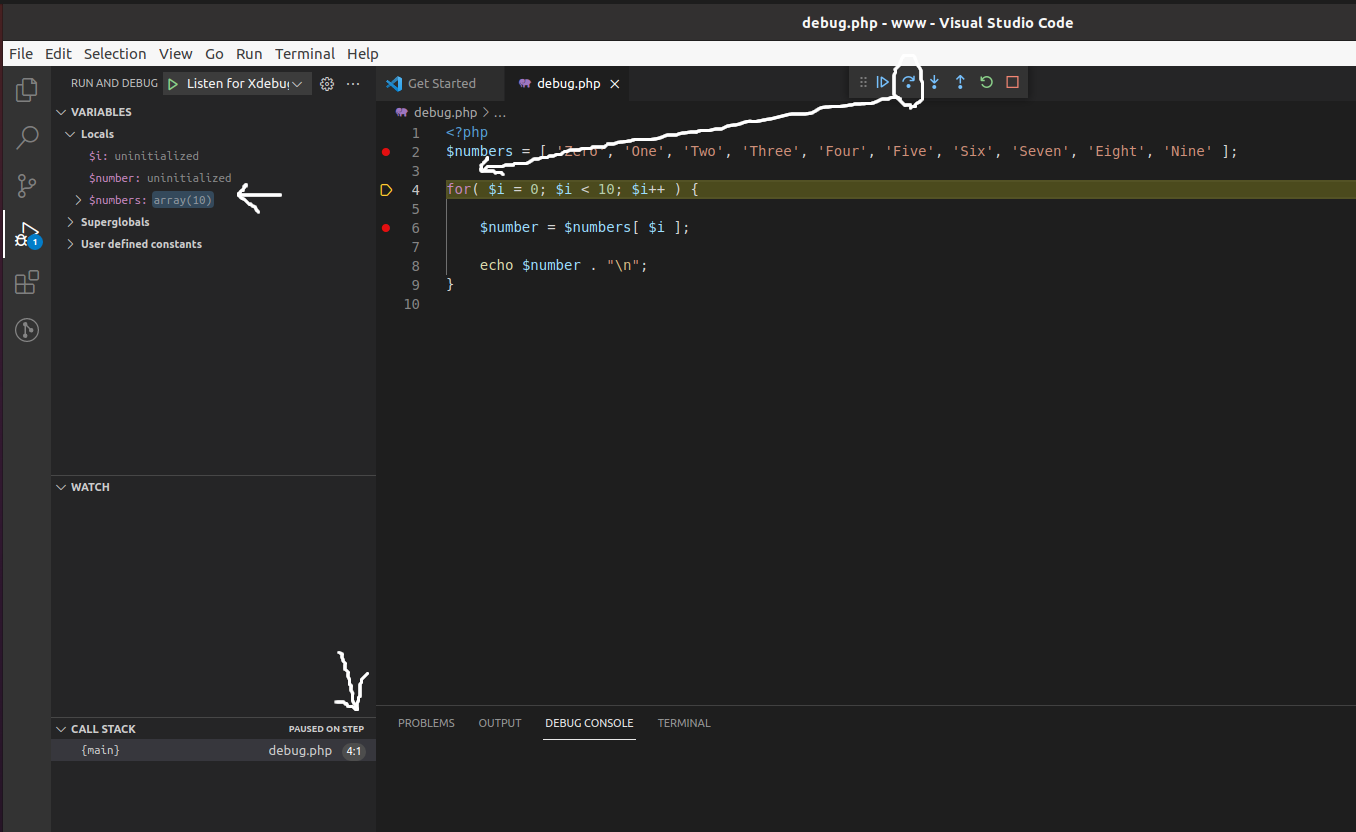 Now again press F10 to move the execution to the next statement. It should initialize the $i variable to 0. We can click the Continue Icon or press F5 to move to the next breakpoint which is the same i.e. line number 6 in our case. Also, check the value of the variables $i and $number after clicking the Continue Icon as shown in Fig 17. We can keep on debugging our code till we are done.

We can always click the Stop Icon or press Shift + F5 to stop the execution. 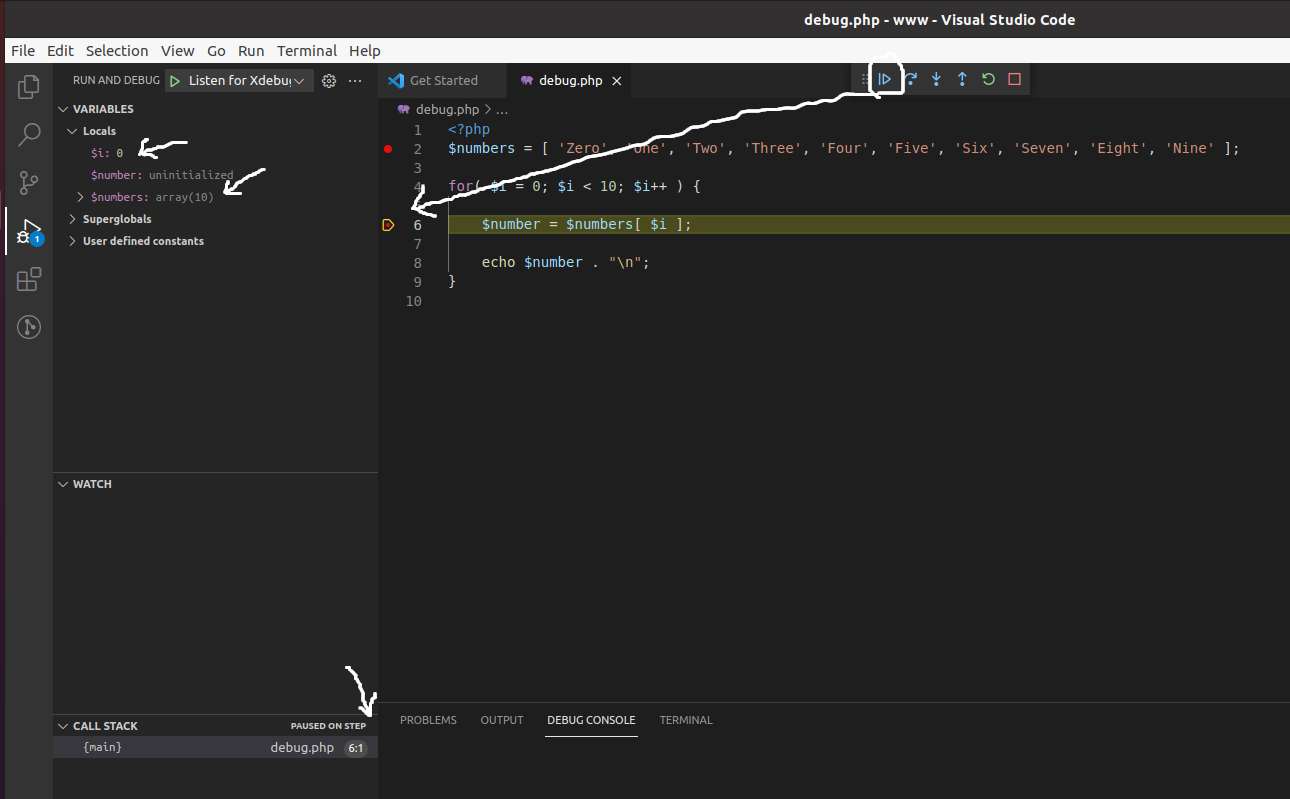 In case of a function call, we can also click the Step Into Icon or press F11 to move the execution to the first statement of the function.

This is all about debugging the source code using VS Code or Visual Studio Code.

How To Install Composer On Ubuntu 22.04 LTS

How To Debug PHP using Xdebug and NetBeans On Ubuntu 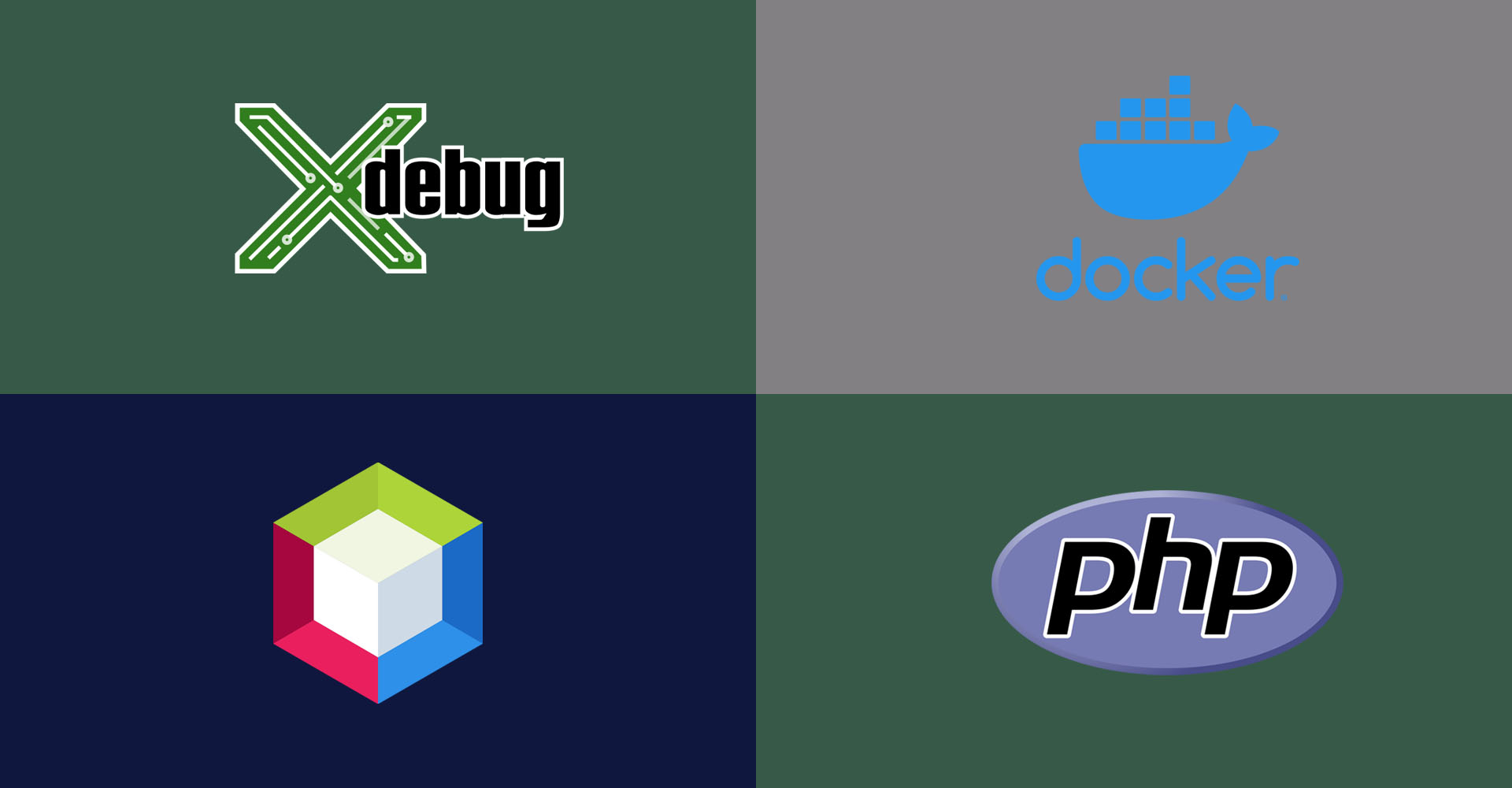 How To Debug PHP using Xdebug, NetBeans, and Docker On Ubuntu